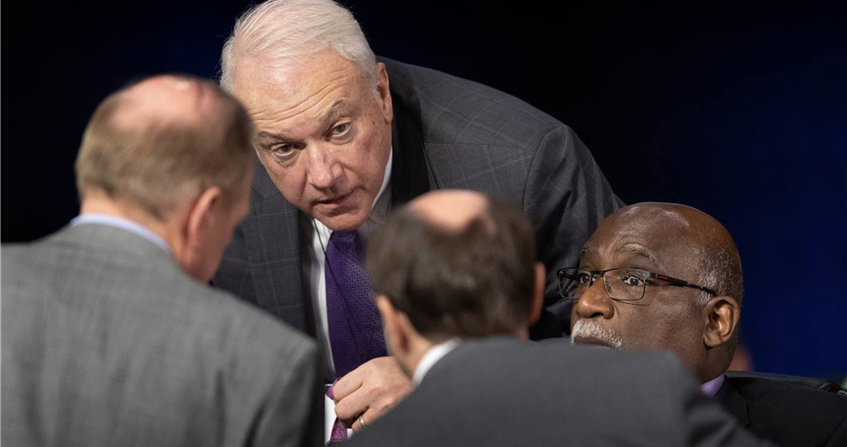 General Conference organizers have determined enough improper voting likely took place at the 2019 special session to nullify a key vote on how congregations can leave The United Methodist Church.

The Commission on General Conference — meeting behind closed doors during its Aug. 7-9 meeting — reviewed an investigation that found “credible objective evidence” of four ineligible people casting votes using the credentials of delegates who were not present.

The commission did not speak in public about its investigation’s findings and did not provide the names of the accused ineligible voters or the conferences they represented.

“When you are dealing with allegations, they may or may not be factual in nature so you don’t want to do any defamation of anyone’s character by inappropriately saying certain things,” said Bishop Thomas J. Bickerton later told United Methodist News. He is the Council of Bishops representative on the commission and leads the New York Conference.

Ultimately, the commission wants the Judicial Council — the denomination’s top court — to weigh what the fraudulent voting means for the legality of the disaffiliation legislation.

The investigation findings come more than five months after a pivotal special General Conference, called by the Council of Bishops to try to resolve the longtime debate over the status of LGBTQ people. Since the Feb. 23-26 special session in St. Louis, discussions of splitting the denomination have only intensified and giving to general church ministries has dropped.

The denomination’s top lawmaking body, by a vote of 438-384, adopted the Traditional Plan that adds enforcement measures to bans on same-sex weddings and “self-avowed practicing” gay clergy.

The number of ineligible voters was too slim to affect that outcome. However, the invalid vote count was enough to cast doubt on the disaffiliation legislation that allows, with limitations, congregations to leave the denomination while keeping church property.

By a two-vote margin, 402-400, the body substituted a minority report for Petition 90066, the originally submitted disaffiliation legislation.

Because voting at General Conference is supposed to be confidential, the investigation did not determine whether the ineligible voters favored the substitution or not. But under Robert’s Rules of Order — which General Conference uses — the possibility that invalid ballots might affect the result of a vote invalidates the entire ballot.

“Having found sufficient evidence that there were invalid votes that potentially affected the result of the vote, the Commission determined that the vote to substitute the minority report is void,” the commission leadership said in a press release.

The substitution eliminated the precondition that churches repay any grants from their annual conference. It also gave a conference’s board of trustees, rather than the bishop, a role in setting the terms and conditions of church’s departure.

The substitution required that departing churches make any payments under those terms and conditions prior to the effective date of departure. The original legislation allowed a term of payment up to 10 years.

With the substitution, the disaffiliation plan went on to pass by 420-390. It is now listed as an addendum to the Book of Discipline, the denomination’s policy book. Seven congregations in Mississippi already have used the legislation to exit the denomination.

The commission also plans to initiate conversations on membership statistics with the Council of Bishops and the General Council on Finance and Administration, the denomination’s administrative agency. An annual conference’s number of professing members helps determine its number of General Conference delegates, but the membership data available can be out of date and unreliable.

The investigation also raised the possibility of irregularities in how delegates were selected and instructed to vote. The commission, behind closed doors, voted to refer these allegations to the Council of Bishops for further investigation.

Bishops preside over annual conference meetings where delegates are elected.

Just before The New York Times story appeared March 14, the Rev. Gary Graves — secretary of the General Conference — acknowledged problems with credentialing and voting. He announced that “a very limited number” of people initially denied credentials to vote had later obtained them. At the time, he declined to give a precise number.

On March 16, the General Conference commission named 12 of its members to serve on a task force to investigate improper voting. The commission also authorized staff members Graves and Sara Hotchkiss, business manager, to negotiate with auditing firms to help with the work.

The Council of Bishops’ executive committee soon called for an independent probe, and the commission hired attorneys with the Nashville, Tennessee, law firm Bass, Berry & Sims to work with the auditing firm, LBMC, in the investigation.

Behind closed doors, the commission developed new registration and credentialing procedures to safeguard against unauthorized votes at future gatherings. The press release said these include the requirement that credentials come with a delegate’s photo. The next General Conference will be May 5-15, 2020, in Minneapolis.

Altogether, the commission spent more than three hours of its Aug. 7-9 meeting at First United Methodist Church in Lexington, Kentucky, closed to outside observers. At the conclusion of the meeting, despite earlier promises to report out its work, the commission did not report any details of its decisions.

The group did not publicly say how it planned to fix the identified problems.

He added that recommendations “outside the scope of the Commission on General Conference are being referred to appropriate bodies for their consideration.”

Finally, he said, a press release would come out on Aug. 10, after commission members had begun their journeys homeward. He added that a full report on recommendations is expected early next week.

The press release said the commission has identified 19 changes to make the credentialing and voting process more secure, including issuing credentials that include photos.

The Book of Discipline urges open church meetings “in the spirit of openness and accountability” and “great restraint” in closing doors to the public.

Paragraph 722 makes some exceptions, including for “communications with attorneys.” It was under this exception, the commission voted to go into closed session.

The paragraph also says: “A report on the results of a closed session shall be made immediately upon its conclusion or as soon thereafter as is practicable.”

Bickerton insisted there were good reasons for the commission’s reticence about its decisions. He said the commission is consulting with its attorneys in what it says in its recommendations.

“We have to maintain strict confidentiality or the integrity of those further investigations goes into jeopardy,” he said.

Hahn is a multimedia news reporter for United Methodist News. Contact her at (615) 742-5470 or newsdesk@umcom.org. To read more United Methodist news, subscribe to the free Daily or Weekly Digests. The original article can be viewed on the UMNS website.