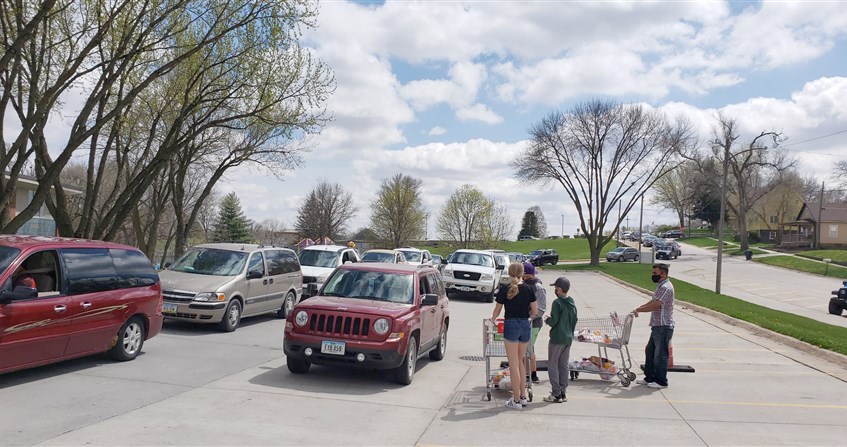 November 20, 2020
share
Denison First United Methodist Church provided much-needed organization, hundreds of volunteers, physical and monetary donations to the Crawford Cares drive-up food distribution program when a massive increase in need became apparent during the COVID-19 pandemic. Crawford Cares is a Facebook-based organization that acts as a message board to connect volunteers to community members who may be less self-reliant in Crawford County, Iowa.

After the Denison Community School District closed their buildings in March 2020 because of the pandemic, an elementary school became a distribution site with a gym, separate entrance, and parking lot with a drive-up area.

Uniquely, and because of the pandemic, this is a mobile food pantry that allows both volunteers and those in need to stay safe and socially distanced. Volunteers organize and package food inside a distribution site then give out the food to cars as they lined up in a drive-thru manner.

Food Bank of Siouxland has waived signature and income information, making the mobile food pantry open to everyone in Crawford County who may be food insecure.
In response to COVID-19, the Food Bank of Iowa has temporarily switched all of its mobile pantries to a “drive-thru” distribution. For ways to get connected, donate, or volunteer, please visit their website for more information.
“We went to the gym, and we packaged the food. We had people unloading a truck, we had people sorting the food, and we had people packing sacks,” said Rev. Mike Fillmore, who leads Denison First UMC.

It was a challenge at first for the volunteers to prepare for the number of food-insecure families that arrived. The usual number of families in need went from 75 per week to over 1200.

“The first time we did it, it was just chaos because we served over 1200 people and cars were backed up a mile and a half waiting to get in,” said Larry Struck, member of the Denison First UMC Leadership Committee and the director of traffic during the food pantry distribution days.

Eventually, the chaos settled down, and the volunteers became more efficient in distributing the food for so many families.

The local Fareway Grocery Store donated ten shopping carts for the food pantry to use each week.

“One of the side benefits is getting to know a lot of people that I really didn't know,” said Struck. “The whole community stepped up, and it was obvious, some of the people who drove through were lucky to have four wheels. We didn't ask for any information other than their name and the number of adults, children, and families that they're picking up for.”

Delivery is another service that the food pantry offers for people who don't have the means to drive to the pantry. There is a phone number to call to have the food delivered.

Denison First UMC generously raised a significant amount of money for the food pantry, helped organize, and handled the volunteers.

“It’s allowed us to develop relationships, really strong relationships with our Hispanic brothers and sisters that we'd never probably would have gotten that same opportunity. So that's just been huge for us,” said Weeda.

Denison First UMC is excited and hopeful to nurture and develop close relationships with all the people of their community.

“At one point [during the pandemic], Crawford County had a 24% unemployment rate, and now we're back to about 7%. So, it's improved quite a bit, but we're still doing it. We have dropped back to once a month, but we are set up and prepared that if we need to mobilize again, every two weeks we will collect food,” said Fillmore.

“We just went into it with one goal, and that is the idea that having hungry people in Crawford County was unacceptable. Every community has issues and problems. You just have to learn to recognize them, and then want to do something to solve them,” said Fillmore.

“In a lot of those cars that go through, there is a little kid sitting in the backseat. They're just so thankful and happy to see you. A lot of teachers were also helping, and the kids saw their teacher there, and it made them happy,” said Struck.

“We gathered before we start, pray, and talk about delivering thousands of pounds of food and the fact that we are about to make a difference,” said Fillmore.

Denison's First United Methodist Church’s involvement in feeding the hungry is precisely the difference that Jesus wants us to make.